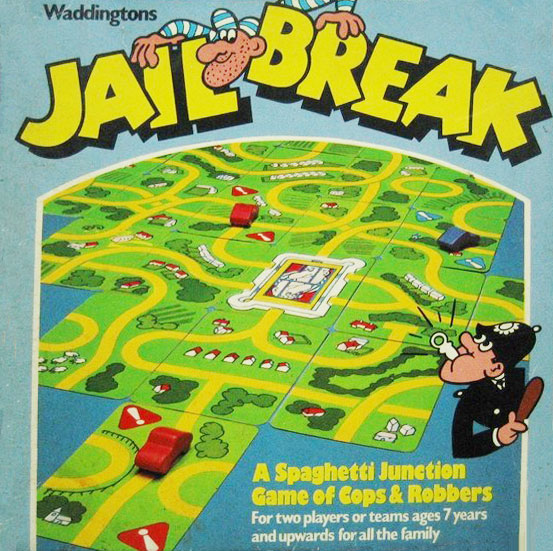 JAILBREAK, by Waddingtons, 1982
“A Spaghetti Junction Game of Cops & Robbers” 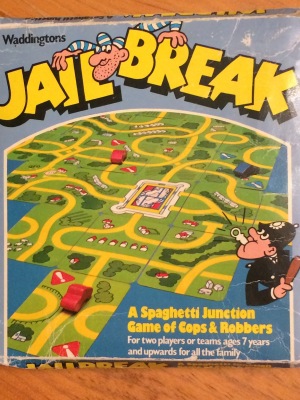 We are starting this blog ‘old skool.’ Waddingtons was a UK-based game distributor in the 1980s, producing a wide variety of games, including the continually-played Monopoly, Sorry! and Subbuteo. Two of those games will probably feature in future posts. Waddingtons was bought out by Hasbro in 1994.
I’ve had Jailbreak for over thirty years and I still enjoy playing it. You can play it as a 2-player game or as teams for a 4-player game. The rules are insanely simple, covering both sides of this tiny little brochure, and that includes hints for both sides that cover most of the back page.
There are 55 cards in the game. Of those 55 cards, one is the jail, which is the starting card that always goes in the centre of the table…

Players then choose to be the convicts or the police. Bear in mind that this isn’t a life choice, it’s merely a preference for the duration of the game. Nonetheless, it’s worth remembering that crime doesn’t pay…unless you don’t get caught, of course. Still, the assumption in this game is that you will get caught but that nonetheless the security at Her Majesty’s Pleasure is such that being caught is not as problematic as you might have originally thought.

Each player takes four cards from the pile but does not show their opponent. This reflects the gritty realism of law enforcement in which criminals and police rarely cooperate. Unless someone’s a snitch, of course, but there are no snitches in this game. The cards have a wide variety of road layouts on them and the fun of the game is in working out how to use your cards best.

The convicts start by placing a card next to the jail, either to the side, above or below. The convicts want to create as many routes from the jail as they can while the police want to limit the potential number of routes out. You can place your card in one of two directions and although some cards are the same either way, the choice of direction of the card can be crucial… 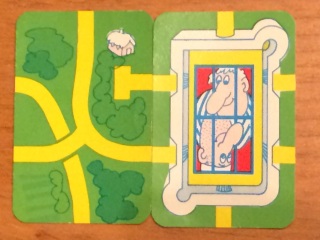 If the person playing the convicts were a total buffoon, though, they could play exactly the same card upside down with a completely different result. While one of the routes out of the jail is still doubled as before, one of them is blocked. This is stupid. As stupid as crime. Except crimes of passion, which may not be stupid as much as evidence of the raw emotions that people sometimes have to face in extreme circumstances that we never expect to face. But I digress…

Players then take it in turns to place cards and when both players have emptied their hand, they pick up four more cards and play them until the deck is empty and the game is over. In the example below, the police play a very average card to the right of the jail. Either they have a terrible hand or they have a cunning plan. But then something interesting happens. There are 12 uniquely marked cards hidden somewhere in the deck – 6 with a red triangle and 6 with a blue triangle. Either player may end up drawing one or more of those cards because they’re randomly shuffled into the deck. In my last game, totally randomly, I drew four of these cards in the first turn, something I had never done before. I still lost, although on reflection because I was playing the police I could at least claim a moral victory. When a card with a blue triangle is put down, the police must immediately put down a blue car to set up a roadblock. When a card with a red triangle is put down, the convicts must immediately place a car on a road. The aim of the game is simple. For the convicts to win, they have to get more than three cars to the edge of the cards. That means they have to have a direct route from the jail to four differing cars and then a direct route from each of those four cars to the edge of the cards. For the police to win, they have to stop more than three cars from reaching the edge. One of the exciting elements of the game is that you don’t know where the edge of the cards will be – all you know is that it must be eight cards wide and seven cards deep. Good strategy will allow you to use this information to direct cars towards or away from the edge. 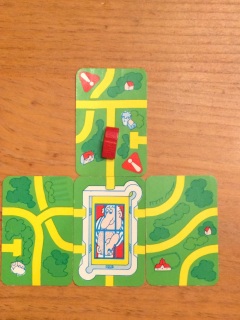 In this picture, the convicts are lucky and get to place one of their own cars. They put the card above the jail and place the car on that road. They could choose any road that’s on the card but once it’s placed you can’t change the road it’s on. In this case, they’ve put it on a road that splits as it leaves the jail. This gives them two options to escape towards the edge. If they wanted, they could have put it on the left-hand road that goes under the main road on the card and then hope to connect it up with the bottom-left route out of the jail. That’s perfectly possible, but even a mildly competent police player would see that instantly and would place a card that would divert the route away from the car, rendering it useless.

What can be fun is playing one of your opponent’s cards and forcing them to put down a car somewhere totally out of the way. What is even more fun is being forced to put down a car and then connecting the roads up so that what seemed like a useless car in fact becomes crucial to the game. That’s immensely satisfying, actually.

Anyway, the convicts here are sitting pretty – they’ve doubled one of their routes to the left and they’ve doubled the route up from the jail and got a car there, which means it can try to escape in one of two directions.

But wait! What’s this? The police also have one of their own blue roadblock cards! What fortune! It’s almost as though that were set up purely for the purposes of this blog! The police place the card in such a way as to block off one of the convict’s exits by bending it into a dead end and they place a roadblock over another route out of jail. Take that, vile criminals!

And that’s really the game. From an immensely simple concept, this can be a highly strategic game. Kids can play and enjoy the roads looping around and trying to get out, while adults can really sit and think strategically about what cards their opponent might have, and can even plan three or four cards ahead to create a complex road pattern that helps them. But even when you sit and try to plan turns ahead, it’s not a mentally taxing game because you have a diminishing hand of a maximum of four cards at a time.

I mentioned earlier that in my last game in my very first hand I had four marked cards and yet still lost. How did this happen? Well, there is one card that if the convicts get their hands on early enough, it is almost impossible to stop them. And it is this card….

…the roundabout! In America this would be a four-way Stop sign and people would all stop and go based on who they thought had reached the Stop sign first and then occasionally they would get it wrong and would all go at the same time and it would clearly be a demonstration of why roundabouts are necessary but the Americans would stubbornly refuse to accept them and would continue with their crazy road layout. Probably.

But this is an English game and this is a 6-exit roundabout. Place this above or below the jail and the police are on the back foot for the entire rest of the game because you have nearly doubled the number of potential exits on the very first turn. If you’re the police, though, and you get to place this as far away from the jail as possible, it can be more challenging for the convicts.

There is clearly a luck element to this game but it’s hard to get upset at that because it’s so simple and fun. If you do get a bad hand or two, you laugh and try to make do with the challenge, assured that a game can turn on good (or bad) placement of one or two cards. As I said at the beginning, I’ve been playing this game for over thirty years and still love it and I’m not sure I could think of another game about which I could say that. The game play is quick, perhaps half an hour at most, the card design is bright, engaging and fun, the cars are clear and simple, and it’s accessible to players from a very early age. There’s really nothing to dislike about this game. It’s not an all-evening game but doesn’t pretend to be. It’s a simple one-on-one game of strategy and chance, not a complex assessment of why people turn to crime in the first place, or of the tactics of some members of the police force in apprehending convicts.

So now the rating system. I’ve decided on a few different factors to rate games in the future:

Accessibility: 5/5 – Ridiculously short rules, play starts in minutes and the skill level is low.
Design: 3/5 – The cards are bright and fun and the cars are simple and wooden.
Depth: 2/5 – If you want, you can be really quite strategic with this game but you don’t have to be.
Replayability: 5/5 – I’ve been playing this for thirty years. That says it all.
Availability: 0/5 – Indiana Jones himself would struggle to find a copy of this game today.

Final Score: 78%. This is a very high score because it’s a game that doesn’t need complex rules, expensive miniatures or anything flashy. It’s fun, it’s cute, it’s fairly quick and its strategic without being difficult. Frankly, I could see myself playing this game into old age.