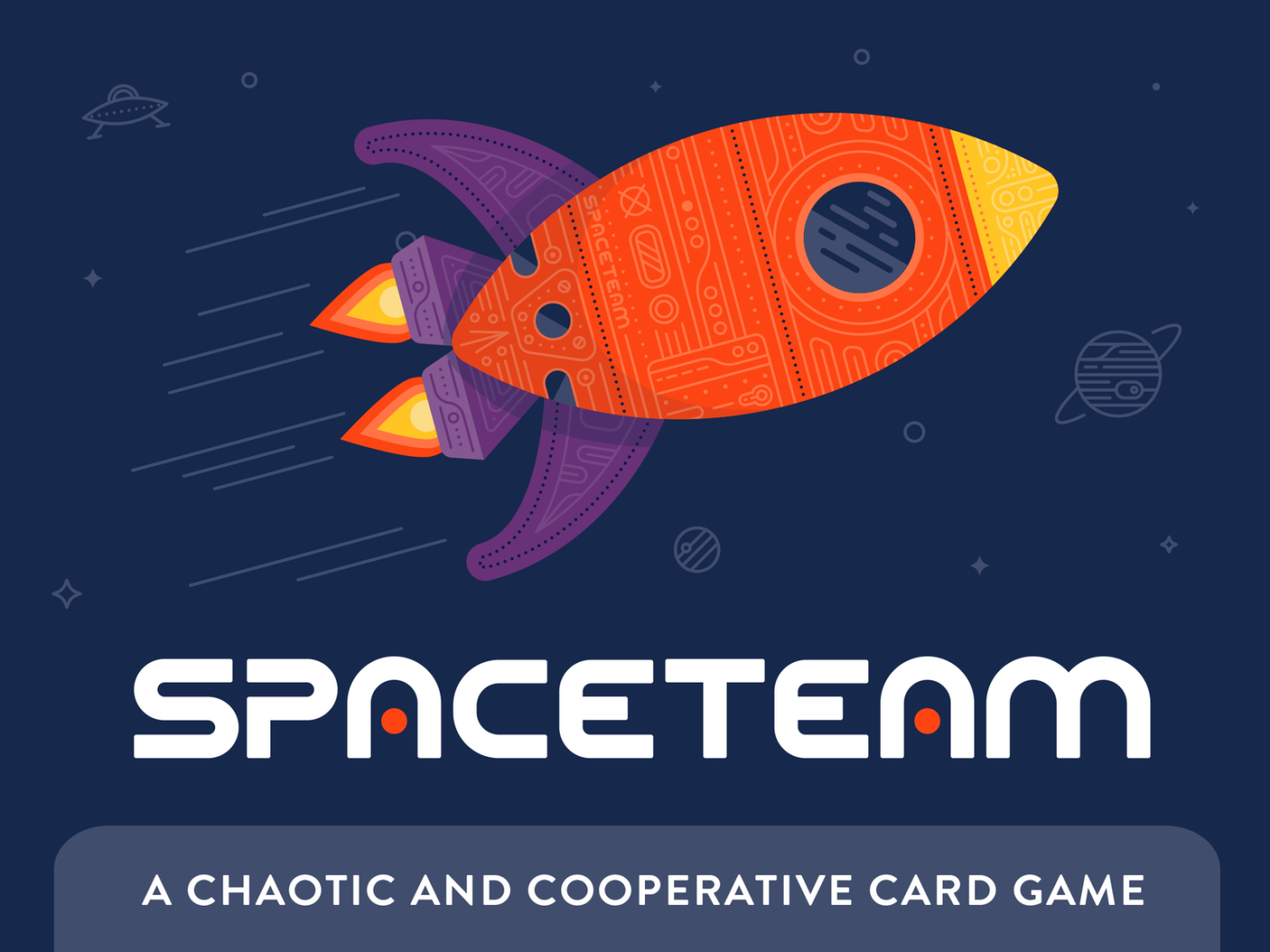 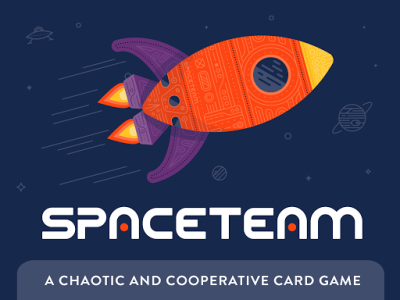 Here at Boy Got Game, we like to review a wide variety of games and Spaceteam is certainly different to anything we’ve looked at before. Originally a game for Android and iOS from 2012, it was a free game that players could download. It was so successful that only a few years later it was turned into a card game. But is it any good, and why might you want to buy it as a tabletop game if you could already download it on your phone?

The game comes in a handy travel-sized box which contains 90 differing cards and a 5-minute egg timer. The cards are a shiny cardboard, so shiny in fact that you will drop them. Not a joke, they strangely slippery and while you’re taking them out of the box, or when you’re trying to shuffle them, you will drop them. And you will be annoyed and then you will realise that that’s an essential part of gameplay.
The aim of Spaceteam is to repair a malfunctioning spaceship before it falls into a black hole, which it will apparently do in five minutes. All players have to resolve malfunctions on the ship at the same time, while dealing with annoying anomalies that hold you back. Each player has a set of tools, and they have to ask for tools from their fellow crewmates to resolve malfunctions. What makes the game is that everyone is asking for tools, and passing tools, at the same time. So it’s loud and frenetic, especially because when you have the malfunction in front of you, you don’t know the name of the tool you need to fix it. 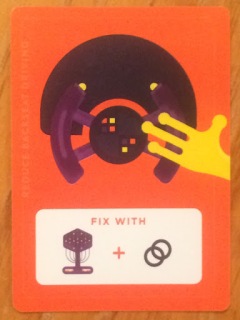 Take this malfunction, for example. You need two tools to fix it – in this case, one has to be a specific tool and the other symbol on this card is a representation of a tool type, like suits in a normal deck of cards. But look at the picture on the left. You’re asking your crew mates sitting around the table for it. How would you describe it? “The thing with a box and wires that’s standing on a stand”? That’s where the fun comes in. You’re all badly describing tools that you need from each other at the same time. So, you’re speaking and listening and swapping cards all at the same time. That’s what makes this game crazed and loud – personal experience suggests it’s not one to play with the kids asleep in a nearby room!

So, how does the team win? Each player has a deck of cards and as they resolve each card, they move onto the next one. Eventually, they’ll find six differing cards that form a picture of the spaceship. If the team gets all six pictures down on the table before the timer runs out, they win. But if they don’t, they get sucked into the black hole and lose. The frantic pace of the game is why the slippery cards are an interesting part of game design, because you have to be really careful as you’re passing and playing cards. But there’s more. As well as trying to resolve malfunctions, players have to deal with anomalies that they might draw as well. For example, the Man Overboard anomaly means that a player has been sucked out of the spaceship, meaning that they can’t speak (which is a really bad thing in a game where you need to constantly be describing things and asking for things). The only way to deal with the Man Overboard is for the adjacant players to literally pull the player back into the ship! Or maybe you’ll turn into a robot and you’ll be unable to use your thumbs for the rest of the game (which is a really bad thing in a game where you’re always holding and passing cards). 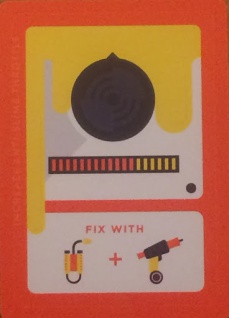 So, see if you can give it a try. How would you describe these two tools? In ten seconds. GO!Yeah, not so easy, is it? Not imagine that three other players are doing the same thing at the same time. That’s what makes this a fun little filler. That said, there is a problem with the game. Having played it about ten times now, we’ve never lost. So, we decided to reduce the time limit to four minutes, but we still won. So, we added more cards to make it harder, but we still won. So, we shortened the time limit to three minutes, but we still won. And that means that, as fun as the game may be, it’s too easy. There’s no question it’s fun but when it’s hard to lose, it’s just not that fun. But it’s a filler, and we have to recognise that. It’s a fun intro to a games evening, or a fun end to it if there’s a few minutes left over after playing a lengthy game. Or perhaps it’s a good game to play when you have a few minutes spare. But it’s not the kind of game you take with you and play at the table in a restaurant! It’s a bit too loud for that!
WE LIKEY
WE NO LIKEY
It’s time to give this game some points….

Accessibility: 5/5 – There are fewer games that are simpler to learn.
Design: 3/5 – I get it. The slippery cards are to make the game slightly harder. But they’re annoying. And while fun, it’s also too easy.
Depth: 1/5 – There is no time for this to be deep. The rule book is two sides of a piece of paper.
Replayability: 3/5 – It’s fun, it really is. So you’ll want to play it on every game night when you have a few minutes spare. But it won’t be the central point of your game night.
Availability: 5/5 – Easily available online and in gaming stores.
Summary: If you play this game, you will laugh. You will have a lot of fun trying to explain that squiggly tool with the things coming out of it, or the round tool with the base and the you-know-what. And you’ll laugh when you all have to swap places in a heart beat.
And then, once you’re done, you’ll put it away and play a more in-depth game which will be the central focus on your gaming time.

Final Score: It’s a lot of fun. A lot of fun. But it’s really very simple and easy. As game design goes, it’s good because it really brings out the laughs, but you’ll spend as long taking it out and putting it away again as you do actually playing it. It’s a good game to have in a collection, but it will never be a classic simply because of how light it is. Exploding Kittens was light, but this is even lighter. It’s funny but not in the same way because this time the humour comes mainly from you not being able to describe things and not from good card art. It’s worth having, certainly worth trying, and deserving of 68%.