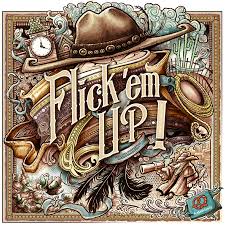 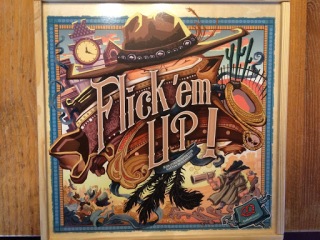 Here at “Boy Got Game,” we like to bring you a variety of games and there’s surely nothing like Flick ‘Em Up. Yes, there are dexterity games on the market, but none so beautifully conceived as Flick ‘Em Up. I’m not even going to hide how I feel about this game because it’s such a winner – the only question is really how well I’m going to rate it.
We start with the box itself. There’s quality here unlike anything else I’ve seen. This wooden box is hefty, it’s weighty. It feels like the kind of box you stored your most precious toys in as a child. It’s an extremely important detail because it immediately shows you the care that has gone into this game. 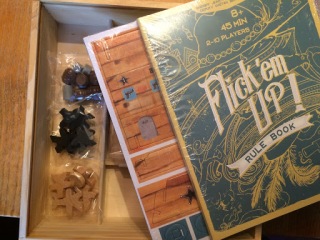 Inside the box is an extremely simple rule book, a scenario book, some thick quality cardboard tokens and some simple but really effective wooden pieces. 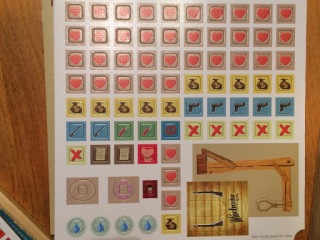 The heart tokens you need from the very beginning but the rest are only used in scenarios as the game gets more complex. What is noticeable as you open the box, though, is the lovely array of colour and the clear simplicity of the game ahead. 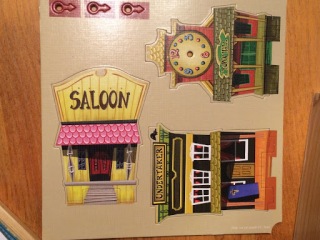 It’s the buildings that set the scene so brilliantly. Made from very durable thick cardboard, the buildings are colourful and cartoonish without being childish. Just like the box, they cleverly take you back to earlier years, of watching Westerns on TV. And the hands on the clock move – as a time marker. Each scenario tells you when the clock should start and when it should end (high noon) but when a game tells you that the time is up and you turn to each other and say, “No, let’s finish this,” that’s a real indicator of an excellent game.
You set up the buildings, barrels, tumbleweeds (yellow cubes) and men according to the picture on the scenario and then you’re ready to play. And the rules are disturbingly simple. You activate one men at a time and choose two of the following actions – move, shoot, use tokens. Each action can be performed twice – for example, if you find yourself in a good spot then you may not want to move but shoot twice. How do you move? Replace the character with the move token and flick it to where you want to go. If you flick like a lunatic and it hits something before stopping, you don’t get to move.
How do you shoot? You put down a little bullet token by the side of the character and flick it. If you knock the opposing character over, you cause a wound – if you hit it but don’t knock it over, it’s a glancing shot and no damage is done. Too many wounds and the character dies. If you go into a building where an opposing character is hiding out, you have a duel where each takes a shot at the other over an ever-decreasing distance until one character is hit. If your bullet ever hits something before hitting a character, there’s no damage, at least in the basic game. And you can’t shoot a man when he’s down.
Duels are great. It’s worth running into a building just to do them. In our last game, I ran into a building with three opposing law-breakers. Pow! I shot the first one dead. The other two fired back and missed. We drew closer. Second shot I missed and they both fired back, missing. We drew closer. Blam! I nailed that villainous Old Man Cooper and sent him packing. His henchman fired and missed. We draw closer. I fired again and sent his henchman straight to hell. Three on one and I popped them all. That’s what a great evening’s gaming is made of.
To remember turn order, the figures on the clock have differing colours. The scenario will tell you what colour hat everyone starts with. The player with initiative activates their first character, then the opponent activates their first character, then the first player chooses another character, etc. Each time a character is activated, you turn their hat over to the other colour, which is a very convenient way to remember turns.

Each side has five characters, which means that in theory the game can take ten players, but I wouldn’t recommend it for a moment because that would mean waiting an eternity for your turn. The fewer players the better for this game. Two players is ideal, three or four is possible, but I wouldn’t go beyond that. Indeed, in a four-player game, even though it says that each player chooses a certain number of characters, I would play that each player takes alternate turns.

This is a surprisingly strategic game. Whom do you activate first and should they move or shoot? How certain are you of making that shot…? Is it worth the risk of running out into the open?
For added atmosphere, at the start of a game put on the soundtrack to The Good, The Bad, and the Ugly. It lasts almost exactly the same length of time as an average game and creates a ridiculously atmospheric mood to the game.
The game is rated for 8+ but there’s no reason it couldn’t go down to 6. Yes, the strategic element means that older players are likely to think more about turn order and even character orientation (when you move or pick up a character, you choose their exact angle, which makes a difference because when you shoot you have to put the bullet next to the side of your figure and a good choice of angle makes it harder to be shot). At the same time, though, two young players of a similar age could certainly enjoy this.
Everything about this game is classy. The wood is simple yet effective, weighty yet capable of being flicked over. Where earlier scenarios involve just killing certain people (the first scenario has the victory condition of killing 3 opposing characters while the second has you having to kill one specific lead character), later ones get more complex, involving dynamite, rifles, bags of money and much more. Each scenario builds up nicely, allowing for a gradual increase in complexity. At the same time, though, the core mechanic is extremely simple – flick a bullet at another cowboy to kill him. I’ve seen reviews of this game that express real frustration because sometimes it gets a little fiddly – a building might get in the way, the angle may be horrible or you may miss every shot in a round. But that’s what makes this game great, because when you hit it feels GREAT. And that’s the joy of dexterity games. You don’t have to be a great military strategist, you just need to be able to flick a token. 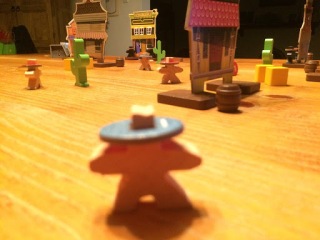 This picture is from scenario 2, where the sheriff is carrying two guns and can fire twice with each shoot action (giving him the possibility of shooting four times and round). It makes him a monster but all Old Man Cooper’s men have to do is kill him to win. This is where strategy comes in. I decided to keep him as far back as possible and let my men bring Cooper’s henchmen down to as little health as possible before bringing in the Sheriff….

It’s not often I’ll mainly show photos of a game but the pictures really say it all. With Flick ‘Em Up, you turn your dining room table into the Wild West. You’re taking the shots, you’re gasping as bullets whistle past, you’re cheering as opponents go down. You’re hiding behind barrels, running into the saloon all guns blazing, you’re taking the sniper shot that stories are made of. Yes, it’s more expensive than your average game but that’s because of the quality of the pieces, which is extremely high.

It’s a competitive game but casually so. Some games rely on the exact measurement of millimetres. Not this. This game just oozes fun. You pick up and put down your characters in roughly the same place they were before because it’s not about the pick up, it’s about the flick up. Or something.

To the ratings, then!
Accessibility: 4/5 – The rules are extremely short but not always clear. House rules are definitely needed throughout but the tone of the game is such that these are always created quickly and easily.
Design: 4/5 – This game oozes class. It feels like classic Westerns and puts you right in the action. There’s nothing fancy but the combination of wooden figures and cardboard buildings works perfectly.
Depth: 3/5 – The scenarios improve in depth but at its core this is a dexterity game where you flick tokens, so depth isn’t really the aim here.
Replayability: 4/5 – The simplicity of the game means that this is a perfect family game to pull out on a rainy afternoon. Set up the buildings as you want, create a scenario (or use one from the book) and then go!
Availability: 5/5 – Available online and in good stockists.

This blog needs followers. I need to know that what I’m writing makes a difference to people’s lives – that you might consider a game based on a review I’ve written, or that you enjoyed something. Please become a follower of this blog and add comments. Thank you.