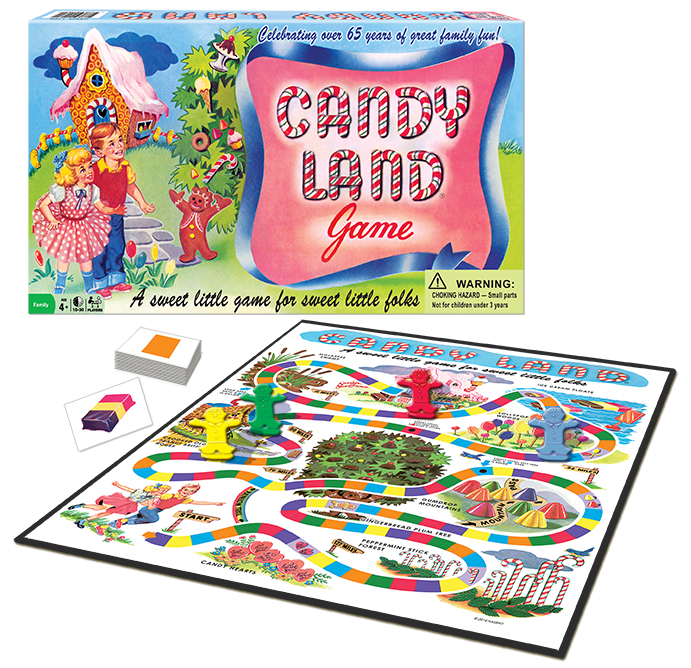 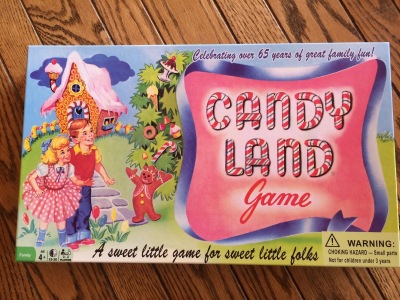 According to the nostalgia sheet included with this game, Eleanor Abbott created the game Candy Land while she was a patient in a San Diego hospital back in 1948. She was a retired schoolteacher afflicted with polio. Seeing the number of children who were suffering from polio at the time, she decided to created a bright, fun, colourful game.
“Who wouldn’t love to dream of visiting a land with Gumdrop Mountains, Peppermint Stick Forests and Ice Cream Float Seas?” Well…. me. And anyone else with half a brain. I get it. If you’re stuck in hospital in the nineteen fifties with nothing to do and you really don’t have much of a brain to play an in-depth strategy game, then a game that is totally dependent on luck might just be for you. But that’s different to releasing it on the mass market in the twenty-first century. There was never a reason to inflict this game on the rest of us, and certainly not in today’s market.
I honestly think this might be a strong contender for the Worst Board Game in History. Here’s how you play… 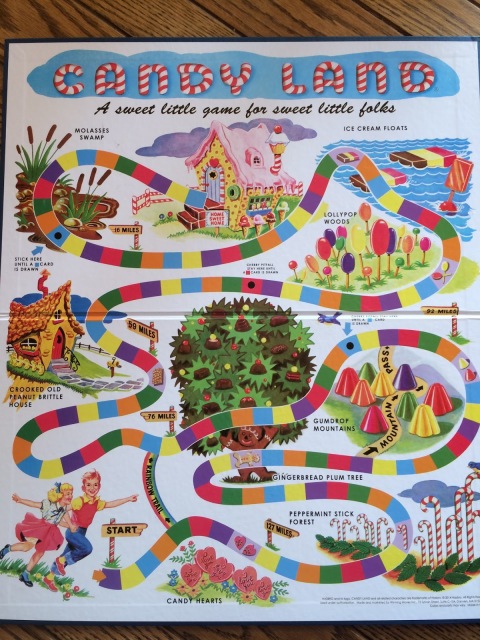 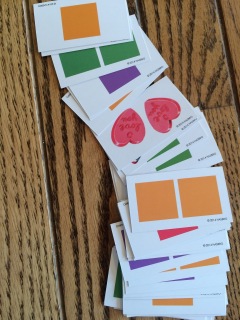 The Candy Land board is a smorgasbord of colour, on which apparently only Aryan children run about in an attempt to get diabetes. There are no dice in this game, instead there’s a selection of cards each with a coloured square on. When you pull a card, you move onto the next square with that colour. Pull a card with two coloured squares and you move onto the second square of that colour. Sometimes you can follow a cut-through, like the Rainbow Trail, which is basically like a ladder in Snakes and Ladders. [For American readers, Snakes and Ladders is Chutes and Ladders. Don’t get me started. I’m not in the mood after playing this game.]
Sometimes you land on a square with a dot on. If you do, you’ve obviously entered some kind of sugar coma and can’t be woken from it until you draw another card of the same colour. That’s right – in the middle of the game you can just sit there. For turn after turn after turn. Stuck in hospital with polio? Want to escape to a land of sugar and fun and colour? Tough. Sit there and don’t move until you randomly draw a card with one particular colour on it. Having fun yet? No? Then let’s add another element. Let’s take the Snakes/Chutes from Snakes/Chutes and Ladders and make them even worse. That’s right, kids. You can be one square from the end and you can randomly draw a Candy Hearts card that takes you all the way down the board to the square right near the beginning with the Candy Hearts on. Feel like you’re going nowhere in this hospital? Here’s a board game to simulate your ennui. Did you get the Ice Cream float card? That’s great. And yet totally meaningless because through absolutely no skill of your own at any random time you can be demoted to the back of the pack. Feeling like life is unfair as you lie there randomly afflicted with polio? Of course you do. So we’ve made a game that truly simulates the random cruelty of your life. We know, we know, Snakes/Chutes and Ladders at least controls how far you descend and also deliberately spaces out the rewards and punishments to create a luck game that’s at least slightly balanced. But why should life be fair? Let’s raise your hopes with random luck draws, so that you can dash ahead of your friends with the Ice Cream Float card only the next turn to have your hopes crushed with the Candy Hearts card. Welcome to hospital life.
And what about game design? Sure, this game is designed for children aged 4 and up, so we’re not exactly looking for complex game mechanics. Yes, having a square on a card and moving it along is fine. If you’re 4. And are living in the 1950s where the height of child entertainment is a stick you found in the garden. For the rest of us, particularly those of us who have played exciting contemporary board games with young children, it is mind-numbingly tedious. But let’s keep it simple. Let’s imagine we’re a very sick 4-year old in need of something simple. The rules say that if two characters land on the same square, they share it. Really?
They don’t bloody fit!!!! How the hell can they share the square when they don’t even bloody fit?!?
Truly, it’s hard to find ways for this game to get worse. Perhaps only if there were a sequel where the characters have eaten too much sugar that they are now too obese to move meaning that you can draw cards all you like but the playing pieces are just going to sit at the starting square until the players themselves stuff their faces with junk food and spew like some Roman banquet so that their pieces move to the square with the main colour evident in their vomit.
If someone gives you this game, assume one of three things about them – (1) they don’t remember how appalling it is, (2) they suffered from polio as a child and they’re trying to open up to you about their experience, or (3) they loathe you with a deep, profound hatred.
By the way, polio isn’t funny and vaccinate your children. Seriously. In fact, maybe Hasbro should distribute this game to every anti-vaccination family around the world and force them to play it until they realise that highly infectious transmittable diseases are horrifying and unnecessary, which is also a perfect description of this game.
Time for our ratings. I think you can guess where I’m going with this.
Accessibility: 5/5 – The rules are ridiculously short because there’s nothing for you to do in the game. Just pick up a card and move your piece accordingly.
Design: 0/5 – Yes, it’s brightly coloured but so is a paint pot, the pieces are too big for the squares and the game is totally random.
Depth: 0/5 – The shallowest game I have ever played. There is absolutely no skill involved at all. You are a passive pawn of chance. You literally have no input in this game at all.
Replayability: 0/5 – Seriously, why would you play this game twice? Nothing in this game is compelling in the slightest. If you give this to a child, all you’re doing is teaching them every time they play that life is fickle and that nothing they do will change their future.

Availability: 5/5 – That’s right. Potentially the Worst Board Game in History is readily available on today’s mass market. It wasn’t consigned to history. It’s not a museum piece. It’s a piece of crap that parents and grandparents still buy children today because adults are obviously cruel and want to dash the hopes of their children from the earliest possible age. If a child asks you for this game, realise that they think you are evil. And if you buy it for them, you just might be.

Final Score: Just because young children seem to enjoy this game because they have yet to learn of better things, I reluctantly award this game double figures. 14%