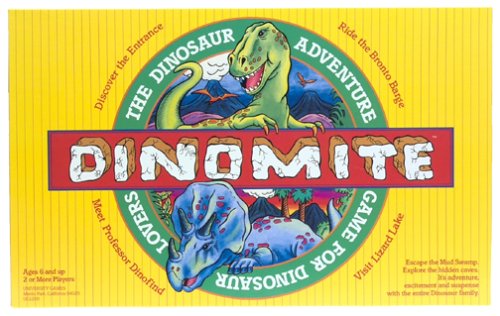 Remember a while back when we reviewed Candy Land and demonstrated how it was one of the worst games ever? Well, you’re in for a treat, because here’s something that’s about to try to steal that crown. It’s going to be close.

The theory behind Dinomite seems obvious – play a game and teach kids at the same time. The practice, however, is different – this game teaches kids that life isn’t fair and that perhaps there was a good reason for the dinosaurs to die out after all. You start on the Stego-Start-Us, which is funny for kids once, maybe twice. Then you roll a die and that determines how far your dino goes. The dinos aren’t bad, actually, for 1988. They’re squishy, plastic figurines with a fair amount of detail on them, making them nobbly and squishy and thus good for kids. So far, as good. Now, the board…

Let’s start with the obvious fact that if you’re making an educational game for kids about dinosaurs, don’t include homo sapiens on the art. In fact, don’t even include a square for HUNTER (at the top in the middle) because there were no hunters because there were no human beings 65 million years ago. That’s a mega educational fail. (Strictly speaking, the Saber-Toothed Tiger is not a tiger, either, hence the more modern term Saber-Toothed Cat, but we’ll allow them that one because back in 1988 this was still the term people used).

The aim of the game is to get from the Stego-START-us (see, it’s not funny any more) on the top left of the board to the DINO-REFUGE on the bottom right. So, unless you’re a halfwit, or a very young child, you’re just going to take the diagonal line from the top-left to the bottom-right. If you pass a square with a dinosaur on it then you just keep going. If you land on an egg square, you draw a DINO EGG-VENTURE card. Another genius pun that, to be honest, isn’t bad for kids. The Egg-venture card can basically send you anywhere on the board – sometimes a few spaces ahead, sometimes across the other side of the board. In other words, total luck. If you actually land on a dinosaur, you roll a die and move in the direction that the board tells you. In other words, total luck. Remember how in Candy Land you could end up being thrown back to near the beginning? This is that, but all over the board. ALL OVER THE BOARD.

In order to speed the game up – because trust me you will want to spend the fewest number of minutes of your life as possible playing this game – the designers came up with a rule of Dino-Greeting, where if you land on another player’s dinosaur, you take another turn. Why? Because otherwise the pieces wouldn’t fit on the squares, just like in Candy Land. There’s actually a missed opportunity here because what they could have done is differentiate between carnivores and herbivores somehow in terms of when they meet up. Perhaps that might have got complicated, but if you’re designing a game that has an educational basis, that was a missed opportunity to me. 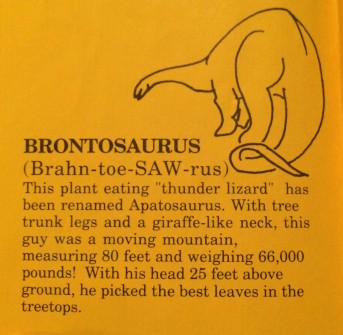 You’ll notice the Bronto Barge near the top right of the board. Yes, that’s a boat for your dino to cross a river. And this is where the educational element really just flies out of the window. How would a dinosaur get on a raft? How would the raft get tied together? You could learn more about dinosaurs crossing water from The Land Before Time than this nonsense. To be clear, I don’t mind silly things in games like this, but if you’re including an educational booklet (complete with horrible American pronunciation guide), then don’t put your dinosaurs on a raft!

But even if we get past that, there’s a fundamental game flaw, which is the over-reliance of luck throughout and then on very specific luck throughout. As you get to the Gate of Rescue, you have to roll a …. wait, GATE? A gate? Ah yes, because hidden near the bottom of the board is Professor Dinofind’s cave and he’s made a giant fence to create a refuge and you can only get in the fence one way. Or is the Secret Entrance actually another way in or not? It’s hard to tell because it’s not really clear on the board. But that’s irrelevant, the point is that there’s a professor who has built a refuge for dinosaurs. That’s the worst kind of education for children. Teach them of volcanoes, or poisonous snakes, of mud swamps, of volcanic rocks. Those things are great on the board. But not people!

Anyway, let’s say we can get past all that! Once you land on the gate, you have to roll a die. You have a 1 in 3 chance of entering the area leading to the Dino Refuge, and a 2 in 3 chance of having to go back. Away from where you want to go. And you can’t ever change direction until you reach a Dino-stop, a square with a dinosaur in it. So, you’re not just going slightly out of your way, you’re going significantly out of your way for vast sections of the game. I know of no other game where you are so often going in a direction you don’t want to go. And you would be amazed to learn that that’s just not fun! Add to that the fact that the Egg-venture cards are so large compared to the board size that they actually interrupt the game, and you’ve got a seriously frustrating game. But wait! We’re not done yet… 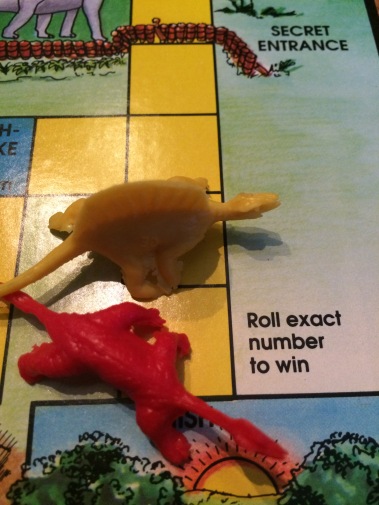 Do you see it? That’s right. You’ve rolled the exact number to get through the Gate of Rescue and then you have to roll an exact number again to enter the Dino-Refuge. My Dimetrodon made it through the Gate of Refuge first but just couldn’t roll the required number so it sat there for turn after turn. Eventually, another dino joined and then the third. The other players were all working their way round the board while turn after turn I just rolled a die, said, “Nope!” and then passed it on. That’s not a game.

Of course, house rules could always be created to end demands to roll an exact number, but the core of the game is basically dice rolling. There’s absolutely no skill to this game at all.

So, now the challenging task of assigning points:

Accessibility: 5/5 – Totally accessible. Simple rules.
Design: 2/5 – The game play is appalling but the educational element and the pieces save it slightly
Depth: 1/5 – There is literally no depth to this game – you just roll a die.
Replayability: 2/5 – Thinking like a child for a moment, this could have some replayability. However, if a child has been exposed to better games, I don’t see it happening.
Availability: 3/5 – In theory, you could buy this online for about $15. But don’t. Seriously. Don’t.

Final Score: I hope I never, ever, EVER play this game again. I gave Candy Land a rating of 14%, a rating that I have always felt might have been too generous. There’s no question that this is one of the worst designed games in human history (a history which apparently included dinosaurs!), but is it worse than Candy Land? You end up going in the wrong direction far more than Candy Land, but the educational element (when it’s right) and the really nice pieces lead me to rank it minutely better. I bought this game from a charity shop / thrift store for something like $5 and genuinely feel like even at that price it wasn’t a good investment. I think the saving grace of this is that it is nearly thirty years old and game design has come on an awful lot since then. Candy Land, on the other hand, keeps being re-released, and there’s just no excuse for that. Playing this game made me wish that human and dinosaurs co-existed, just so a T-Rex could rampage through the house and bite me in half before I finished the game. 15%.