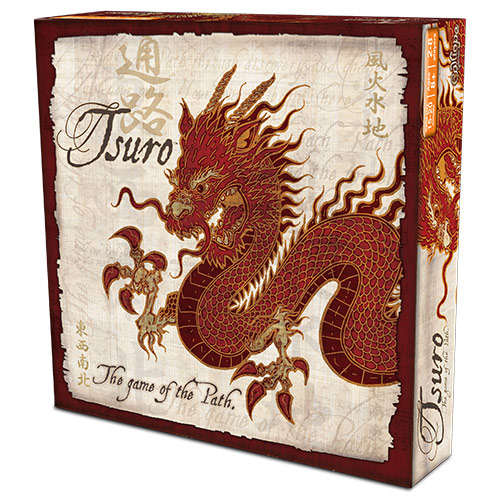 The very first review we ever did on this site was of a classic game called Jailbreak in which players laid down cards and made lots of spaghetti roads in order to play a game of cops and robbers. It was fun, it was simple, and it’s no longer available. Tsuro takes a very similar concept but adds a touch of calm class to it. Instead of cartoon cops and robbers and little wooden cars, it carries a graceful air of a game that pretends it is thousands of years old. It’s smart and classy, but fundamentally an almost identical game.

“Since time began, the Dragon and the Phoenix have guarded over and guided the intertwining paths of life, maintaining the careful balance between the twin forces of choice and destiny. These two powerful beings share the noble task of overseeing the many roads that lead to divine wisdom. Through its masterful blend of strategy and chance, Tsuro represents the classic quest for enlightenment.” This is the introductory statement in the rules, indicating in a rather fanciful way that this game is part skill, part luck and that’s about all there is to it!

As abstract games go, it certainly oozes class. The marker stones have nice dragon engravings on them, are weighty and are good to hold in the hand. Only when you pick up quality pieces like this do you remember how nice it is to be holding something like that, even if you don’t hold it for very long. The tiles are also of a nice heavy card and the board has a nice design. In terms of components, it’s a nice game.

Game play is simple. Each player places their marker stone at one of the forty eight possible starting points around the board, and are dealt three tiles, which they keep secret. You play a path tile in front of your stone and then move your stone to the end of the path. Then you draw a tile. The winner of the game is the person who can keep their tile on the board for the longest. It’s a very simple game.

The challenge comes when your stone starts drawing close to another player’s stone. In the event that the two stones are facing the same blank space (pictured right) then the person who lays down the next tile gets to decide not only where their stone ends up, but where the stone of their opponent ends up. In the middle of the board, this can be anything from an inconvenience to a problem, but by the board edge, it invariably means game over for the player who isn’t laying down the tile, as you can see below, where the yellow player (me) is about to be steered off the board by the black player (my four-year old son).

The game can take up to 8 players, but wit that many players you end up perhaps playing three tiles, four if you’re lucky, in the entire game. By that point, it’s totally a game of luck. Three or four players is really the sweet spot for this game because it allows you room to play strategically. Except there’s a problem. The problem is that there’s a very strong strategy to win this game, which I learned from my four-year-old son. Start in the corner, move along the edge as far as you can go, turn into the board once you get close to the corner, turn back and keep running a straight line back, if you can. While you’re just doing laps on your side of the board, the other players are duking it out against each other. That’s not a definite winning strategy, but if you get the tiles that allow you to do it, it’s a very strong strategy. 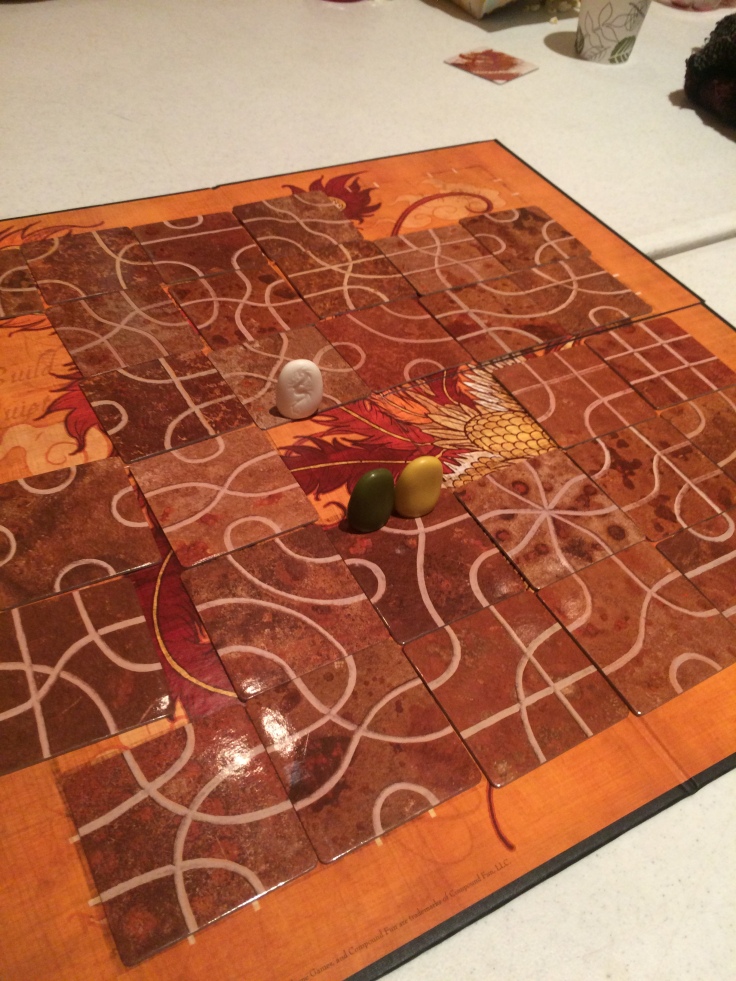 That said, there can be tense moments. In the picture above, for example, all three players ended up staring at the same blank space right in the middle of the board. That was exciting. (Note, by the way, the tiles that have slipped – that often happens and can be frustrating). This is certainly not a serious strategy game but it can be an excellent introduction to strategic thinking for young kids. Later versions of the game took Tsuro to see with little ships that were able to fire on each other. That certainly sounds more intriguing than this basic game.

Accessibility vs Complexity: 9/10 –  You essentially open and play because the rules are on one side of a piece of paper.
Design: 6/10 – It effectively communicates a simple abstract idea and makes a fun game out of it and the component quality is nice

Skill Required: 3/10 – My four-year old won our first game.You don’t have to be a strategic genius to win at this game, and luck certainly plays a notable part, especially with more players.
Replayability: 9/10 – If you’ve got 15 minutes, this is a perfectly good game to bring out. At the time of writing, I’ve played more games of Tsuro in 2017 than any other game – twice as much as any other game, in fact.
Availability: 9/10 – Available in stores and online in the $20-$30 range. I’m not sure it’s
worth the upper limit of that range.
Final Score: It’s a simple, quick, harmless game. It’s great for family games sessions and good as an amuse-bouche to start off a more serious games evening. If your family just plays crappy old parlour games, this could be a good game to buy to help broaden their horizons. You’re not going to be retelling stories of the time when you laid that amazing tile the next day, but you’ll have fun while you play. You won’t find Enlightenment as it promised, but you’ll spend a fun ten to fifteen minutes. 55%.